There are 78 259 foreign students from 174 countries studying in Poland, over 5 516 more than a year ago (over 7,5% increase) in the academic year 2018/2019. Foreign students currently make up 6.37% of the total number of students in the country (eleven years ago the figure was only 0.71%, in the academic year 2017/2018 - 5.63%). The upward trend has been maintained since 2005, i.e. since the Conference of Rectors of Academic Schools in Poland (CRASP) and Perspektywy Education Foundation launched the long-term “Study in Poland” program. 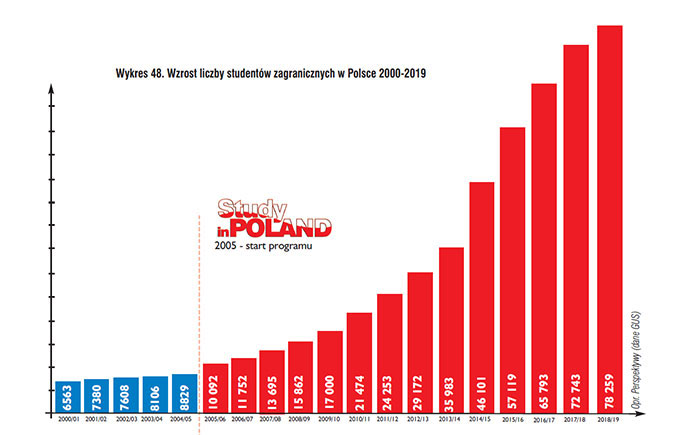 Increase in internationalization ratio, which is 6.37%, is due to the fact that more and more foreign students study at Polish universities as well as decrease in the total number of students in Poland. In the academic year 2018/19, there were 1 228 667 students in Poland - over 63k less than in the previous year. Their number drops from year to year.

Students from Ukraine and Belarus are the dominant group at Polish universities. In the academic year 2018/2019, 39 203 Ukrainians and 7314 Belarusians were studying in Poland. This is another increase in the number of students from these countries. It results, among others, from a similar culture, close neighborhood and Poland's membership in the EU, however, wide offer, a wide range of courses and programs as well as a high level of teaching staff are the most important for them.

High quality of education is a criterion that is also important for other nationalities that decide to study in Poland. Students from India rank third in the list of foreigners studying in Poland (3571), and students from Spain rank fourth (2131). The number of students from these countries is steadily increasing. From year to year, there are also more students coming from Turkey (1928), Czech Republic (1655) and Germany (1315). In the academic year 2018/19, the number of Norwegians (1494) slightly increased, who study mainly medicine-related fields, while the number of Swedes (1069), Americans (753) and Saudis (697) choosing largely these fields of study has been decreasing for the few years. This is a warning signal for medical universities.

Asian students are increasingly interested in studying in Poland. More and more people from China (1259) and Taiwan (917) come to Poland to study, and their number is steadily increasing every year. In comparison with the previous academic year, the number of students from Kazakhstan (1024), Azerbaijan (756) and Uzbekistan (467) increased significantly.

There is a noticeable increase in people studying at Polish universities from African countries, such as Cameroon (575), Zimbabwe (376) and Rwanda (143). There are small numbers of students from South America studying in Poland.

A rapid upward trend is observed, as far as students from India are concerned. Currently there are 3571 people from India studying in Poland, i.e 584 students more than in the previous year. Compared to the academic year 2016/2017, it was not such a spectacular increase when it reached 138%. A rapidly growing population in India and at the same time not enough places in Indian higher education institutions make them more and more considering studying abroad, including Poland.

Another future market for Polish universities is Kazakhstan. In the academic year 2018/19 in Poland there were 1024 students from this country. Kazakhs attach great importance to education. They look for new opportunities to study abroad or for students exchange. This gives our universities the chance to attract more students from Kazakhstan.

In the world the number of foreign students has risen to 5.3 million students. More than half of international students come from Asia (the majority is from China and India). The most attractive for foreign students are OECD countries - United States, Great Britain, Australia and Canada. France and Germany, as well as Russia, are also popular. European students usually choose European Union countries as their educational destination and constitute 24% of mobile students in all OECD destination countries.

Despite the fact that the level of internationalization in Poland is growing, there is still fewer percentage of students than in the most developed OECD countries, or even in Saudi Arabia. More foreign students also study with our neighbouring countries: Czech Republic, Hungary, Slovakia and Lithuania. Poland remains one of the least internationalized countries of the European Union and OECD. However, we are pleased that her internationalization rate has increased, which bodes well for the future.